To make this photograph, Lutter positioned objects and artifacts from the Pacific Islands in a gallery arrangement she curated specifically for her camera, configuring the artworks based on the compositional needs of her photograph, rather than regional or chronological relationships among the objects. Reflecting on the making of this image, Lutter noted: “I was allowed to pick all my favorite pieces…. I brought all these characters together that aren’t from the same tribe, and aren’t from the same island, and might not really speak the same language, but I wanted them all to talk to one another.” 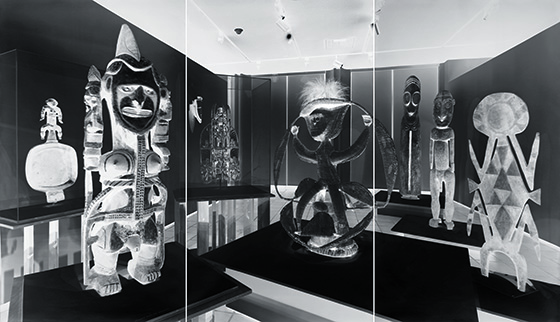 2017–18 Commissioned by the Los Angeles County Museum of Art through an artist residency supported by Sotheby’s
M.2018.174a–c
© Vera Lutter