Steve Roden: Soundtracks for "Ghosts Before Breakfast" by Hans Richter

In conjunction with the exhibition Hans Richter: Encounters, artist Steve Roden has created a series of sountracks for the Richter film "Ghosts Before Breakfast" (the original soundtrack was destroyed by the Nazis).

Here is Roden's description of the project:

In 1927, Hans Richter was asked by the Gessellschaft Fur Neu Musik in Berlin to make a film together with Paul Hindemith for their annual festival of music in Baden - Baden. Hindemith suggested that the film be bucolic. Because time was short, Richter, for the most part, used objects as actors, and in his own words,  “started to apply a method I had used before: improvisation.”

The resulting film was titled “Vormittagsspuk”, which Richter titled in english “Ghosts Before Breakfast” and “Ghosts Before Noon” (a literal translation would be closer to “To Spook Before Noon” or “Morning Spook”). One of the things that stands out in the film’s history is the loss of the original soundtrack.

While it would be presumptuous to attempt to create a definitive new score, the absence of the original offers an interesting situation, allowing one to explore Richter’s ideas in relation to film and sound in the context of one of his own films, now rendered incomplete.

A good place to begin would be Richter’s own words from the 1947 exhibition catalog/anthology, Art and Film:

“I believe firmly that music for the silent avant garde film is
essential. Of course it depends on what music.However i do not
believe in the synchronization of sound and image... I agree with
Man Ray that we must avoid complete synchronization. We should
find a way to let the sound and the picture move on its own in the
same direction, but nevertheless, separately. This refers to the
spoken word as well as to the musical and other sounds.”

The accompanying soundtracks I will be posting should be seen and heard as a kind of sketchbook, exploring various approaches - both logical and confused. Cues come from Richter’s words, and the film’s history.

A couple of months ago a friend sent me some info on a free iPhone app called Tunetrace, which makes music from images.   An excerpt on the app from evolver.fm: “Once you input a drawing by taking a photograph of it within the app, Tunetrace analyzes each skeletal line and configuration in your drawing and turns it into code. Afterwards, twinkling lights fill the screen as they move along each pathway in the drawing, interpreting the code and playing corresponding music as they go.”

After spending some time making drawings and music with the app, the results were underwhelming, so I decided to use photographs instead of drawings - hoping that if I confused the app it might lead to more interesting music.   Since the app arrived right around the time I was beginning to work with “Ghosts Before Breakfast”, I decided to try capturing screen shots from Richter’s film off my laptop, using them with the app. While the sound wasn’t really any more exciting, the process offered a kind of integrity in that the sound was truly being generating from the film. In a way, the app became a vehicle of alchemy - where a soundless image was transformed into sound, offering a relevant new voice where one had been lost. 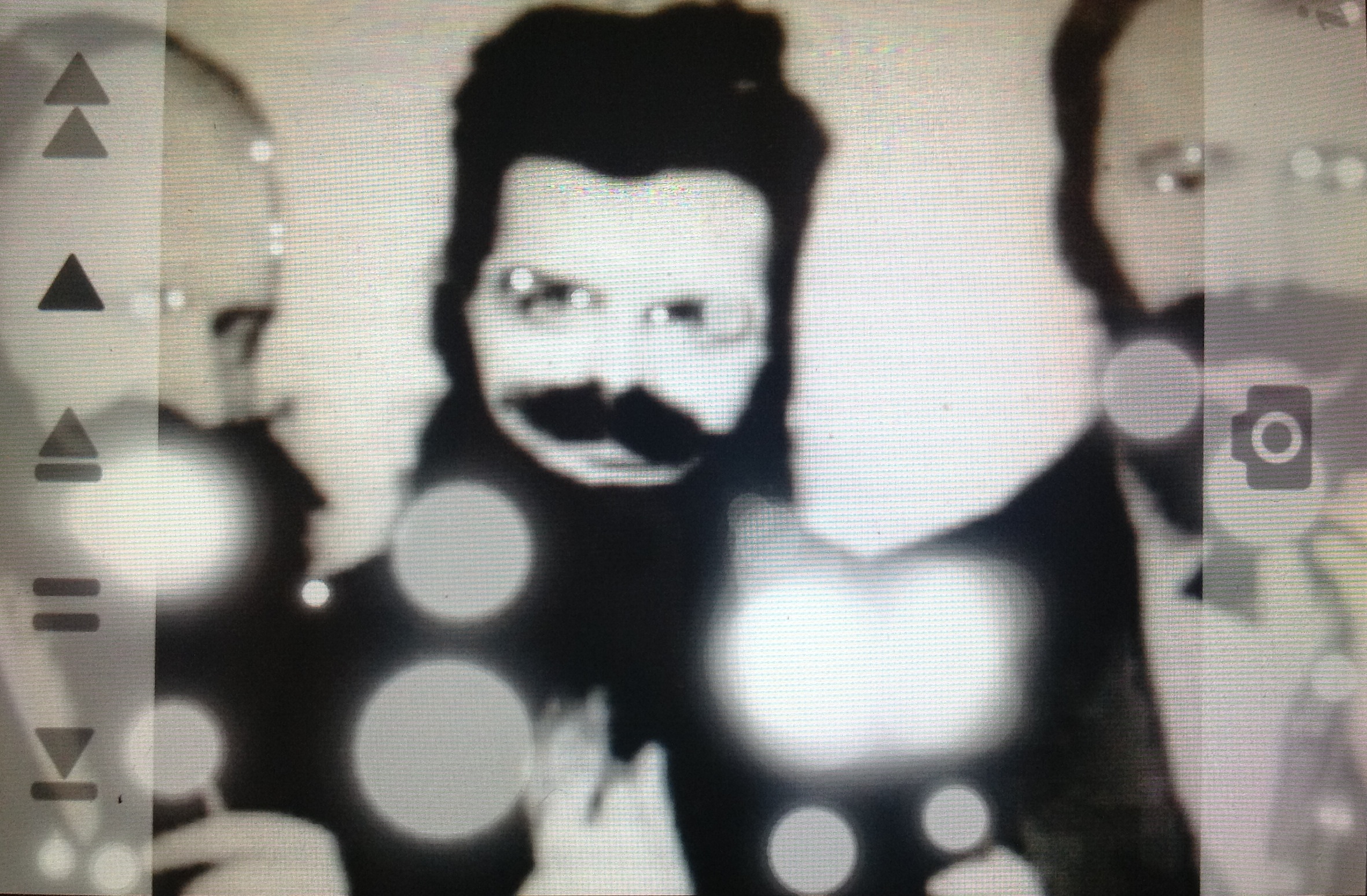 Screenshot from Ghosts Before Breakfast in the Tunetrace app.

After listening to the loops generated by the app, i decided to manipulate the results through fragmentation, playing them backwards and shifting their pitch. The hope is that while the sounds have been altered, the integrity of the app’s results remain somewhat intact... and I view it more as an approach of creative editing than digital processing.

This soundtrack was not created while watching the film, nor were the sound files necessarily matched with the images that generated them. Instead, I worked on the composition as if I was working on an audio work, later nipping and tucking the soundtrack to fit within certain film sequences. All of the emotional resonance between the sound and image is a matter of happenstance.

I also decided that that in every iteration of the score, the stop motion scene of the plant will remain silent.

Thanks to Stephen Biller for steering me to the tunetrace app.

The first step was sanding the surface an LP of Hindemith’s ‘Symphony in B Flat for Concert Band’ with fine grain sandpaper and then recording an attempt to play the damaged LP. Next, I worked the surface with a rougher grade of sandpaper, and again, recorded the playback results. During the recording of the LP, I watched the needle bounce all over the nearly unplayable surface, which offered an occasional snippet of music amidst a barrage of skips, pops, clicks and cracklings. While listening to the very broken surface, the tiny fragments of music were evidence that destruction does not always lead to total annihilation. 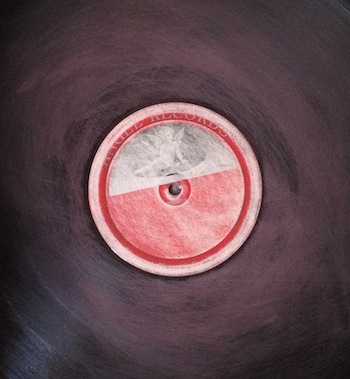 Rather than interpreting absence as a silence, I decided to emphasize the sound of the act of erasure... so along with the sounds of the damaged LP, I used  recordings of myself while sanding the LP’s surface. And so, every sound used in the soundtrack was birthed through a physical act of destruction.

While listening to the soundtrack, one can hear in many instances the repetitive clicks of a needle stuck in various damaged grooves. As someone who grew up in the heyday of the LP, these repetitive clicks always bring me back to the end of the record - when the ‘music’ has ended, and the needle rests in the silent final groove, continually circling the label, offering a series of ‘clicks’ repeating at a speed of 33 rpm. Unlike recorded sounds, these rhythmic clicks are a kind of percussion, where the groove and the needle conspire to offer the listener the sound of the object’s surface. I have always felt that this rhythmic repetition was a kind of coda, so familiar and beautiful in how it has accompanied the end of every LP I’ve ever listened to. depending on one’s mood, the repetitions feel like a broken record or a lullaby.

In response to Richter’s words, I would add that rhythmic repetition of sound can also articulate space - not physical of course, but in terms of emotional immersion.

Along with these explorations of the destruction of sound and the sound of destruction, I am also interested in (and perhaps, a bit nostalgic for) the acoustic and tactile experiences that go hand-in-hand with experiencing sound that is contained within an object that can be physically altered by its user. While the artifacts of the destruction of my Hindemith LP were created purposely, every LP that has been played, at least once, contains some form of physical evidence of the way the object has been handled, and the artifacts of such handling can usually be heard.

"Music was first used in the movies to cover up the sound of the projector and audience noises. out of this evolved the “aesthetic” of “mood music”, dramatic, lyric, allegro furioso (for chases), mysterioso (for suspense), etc. By and large, however, the role of movie music was a passive one: at best it reinforced the image, at worst it was maudlin accessory; rarely did it have a “comment” of its own to make and, even more rarely, a life of its own. after half a century this has not changed.”
Hans Richter

In 1929, a year after creating the original soundtrack to “Ghosts before Breakfast”, Paul Hindemith composed a work titled, "Trio fur Bratsche Heckelphon und Klavier" (viola, heckelphone and piano). The heckelphone was invented in 1904 by Wilhelm Heckel and his sons. The instrument is similar to an oboe but pitched an octave lower - and it is also nearly four feet long (and heavy!).

Since this trio piece is very close in age to “Ghosts Before Breakfast”, I decided to create a new soundtrack using samples of a 7” recording of Hindemith’s 1929 piece for three instruments. The idea, particularly coming on the heels of a soundtrack wrought through destruction, was that this one would be a soundtrack of construction–and unlike the previous two soundtracks which were created through noise and electronics, this one would emphasize the sounds of traditional musical instruments (although they have been processed via pitch shift, fragmentation and looping). On top of the sampled instruments, I decided to make it a quartet, playing a bit of lap steel guitar–both bowed and plucked–so as to be part of the band.

For my fourth soundtrack, I used every sound-generating image in the film (such as a rolling ball, a sliding door, and a duck) to determine the sounds that would be used in the soundtrack. After compiling an image/sound list, I tried to make a recording of each sound. Most were recorded in my garage on August 18th around midnight (when it is quiet); but In some cases, since I don’t own a gun or a duck, I found a recording on the web or in my own library.

After the sound library was built, I put the sounds in alphabetical order, rather than arranging them in the order they would appear in the film, so that  an image and its corresponding sound would rarely appear at the same time. Along with a situation of displacement, I was interested in playing with memory and time, so that a viewer might hear the sound of two men punching each other in the first few minutes, but would see the corresponding image a few minutes later.

All of my recordings were made with a small Sony pcm-d50 digital stereo recorder.

Here is the list of all sounds as seen in the film:

birds (from a 1920’s 78rpm record)
broken china (a cup thrown onto a concrete floor)
chairs slid out from under a table
clock
crawling (on the bathroom floor)
duck - (from the internet)
footsteps/walking (in my studio)
guns (from a video on recording the sounds of gunshots via youtube)
laughing (me)
punching (fists into a furniture blanket)
records on strings touching/spinning
rolling ball (one metal, one paper - crumpled)
rubbing beards (my unshaven face)
rubbing faces (my freshly shaved face)
running (in circles in my studio)
shoes on steps (up and down a wooden box)
sliding metal door (studio door at night, with crickets)
stomping (on a concrete floor)
tea tray placed on table (4 ceramic cups, a plastic tray, a tea kettle)
teacups on table (4 ceramic teacups slid across a wood table)
tying a necktie (tying a shoelace)
up and down a ladder (metal ladder. tennis shoes)
water from a hose (at night on front lawn)
windows and doors opening/closing (bathroom door, studio windows)

Some of the sounds have been processed towards abstraction, while others are simply presented as recorded.