The LACMA9 initiative provides opportunities for the community to utilize technology for expression, and supports established and emerging artists through commissioning new work, including projects by Nicole Miller, Wong Fu Productions, and Jorge Pardo.

Using oral histories gathered at the LACMA9 Art+Film Lab as a departure point, installation artist Nicole Miller will follow up with select residents along the LACMA9 route to create new video works. The series, titled Believing is Seeing, comprises video portraits offering a distinctive and intimate glimpse into lives of Southern Californian’s. Miller’s project mines “stories that residents feel deserve to be told” about their lives and communities. “I believe that the stories individuals choose to present are a great signifier of the values of a community.”

View these collaborative works at the museum on special free days at LACMA for each community. Above is the latest installment of the Believing is Seeing series. At the project’s conclusion, there will be nine videos, one representing each LACMA9 site.

Miller received her M.F.A. from the University of Southern California.  Her work has been shown at Hammer Museum, Los Angeles; High Line, NYC; and the Studio Museum in Harlem.

Wong Fu Productions is known for their widely successful YouTube channel. With over two million subscribers and 300 million views, the independent new media company has created web series and short films with a variety of artists and companies in all parts of the world.

The LACMA9 Art+Film Lab partners with Wong Fu Productions to support their voice as emerging filmmakers. In February 2014, Wong Fu Productions wrote, directed, and produced the art film short, The Other Side of Yesterday, with the LACMA museum campus serving as both a film character and setting. The film premiered at the Montebello Art+Film Lab on Friday, May 2, 2014 to a live audience of over a hundred people.

The Other Side of Yesterday
A Wong Fu Productions and LACMA9 Art+Film Lab collaboration
(2014, 9 min., video)

Traumatic life events can cause people to be stuck in the past. Iris, a young woman, finds herself in this scenario, literally: after waking up in "yesterday," she meets Keller, who helps her understand why she has not moved on and guides her in the right direction. 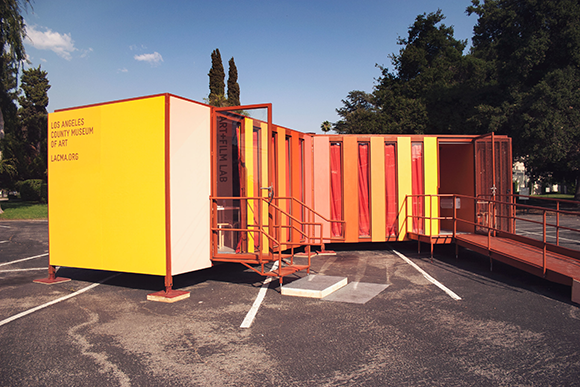 In winter 2013, LACMA commissioned Jorge Pardo to design and fabricate the LACMA9 Art+Film Lab, a functional arts environment that houses workshop space, an editing lab, and oral history booth for the route's first six cities.  Known for blurring the lines between architecture, design, and sculpture, Pardo reimagined the standard shipping container in three interlocking parts made of reinforced steel, Plexiglas, and plywood.  From June 2013 to April 2014, the colorful structure, outfitted with custom-made curtains and lighting, traveled along the LACMA9 route serving as a pop-up artwork and functional classroom.  For the final three cities, LACMA is partnering with The City of Compton Parks and Recreation, Grevillea Art Park, the City of Torrance and the Torrance Art Museum for programming sites.