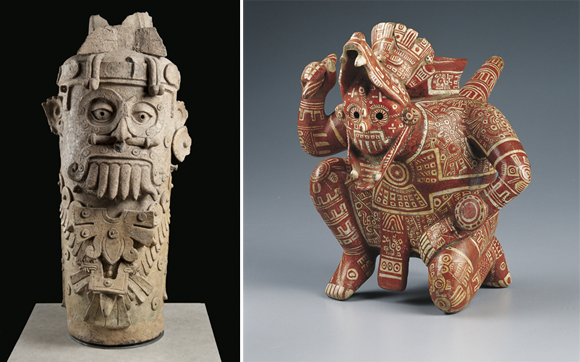 After the fall of Tula in AD 1200, many Toltecs migrated south to Cholula, where they built a new Tollan. They dedicated the city to Quetzalcoatl, the Plumed Serpent, in whose honor they erected a temple. Cholula soon emerged as the primary center of religious authority and pilgrimage in Mesoamerica, and could be compared to Rome for Christians or Mecca for Muslims.

As the most important pilgrimage destination in the region, Cholula became a crossroads. The constant flow of exotic materials fostered the development of one of the most significant marketplaces in the Americas, an achievement befitting the city’s deity, Quetzalcoatl, who was also known as the patron of merchants.

By the fourteenth century, a new style of art had emerged alongside a pictographic system of communication, connecting the geographically distant kingdoms of the Children of the Plumed Serpent. Known as the International Style, it was characterized by a vivid palette and bold symbols that reduced ideas and spoken words to icons. This shared visual vocabulary facilitated the exchange of information across ethnic and linguistic boundaries.

The World of Tula and Chichen Itza Feasting, Divination, and Heroic History