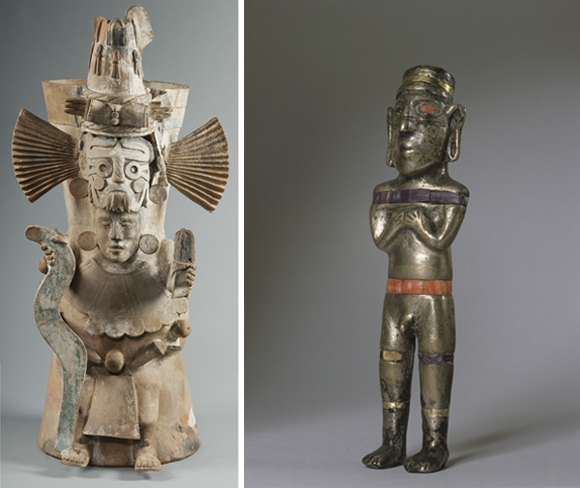 At the time of the Spanish conquest, Mexico and Peru were each dominated by a single ethnic group—the Aztecs and the Incas, respectively—that had aggressively extended its political and economic power over a large geographic area. These were the two largest empires ever formed in the preconquest Americas. In the north, the Aztecs' urban government joined forces with two other powerful city-states (Tlacopan and Texcoco) to form the expansionist federation known as the Triple Alliance. The imperialists to the south are known as the Incas.

Each empire believed that the foundation of its capital—Tenochtitlan for the Aztecs and Cuzco for the Incas—was supernaturally ordained. At the center of each capital lay the sacred precinct: the Templo Mayor (main or great temple) in Tenochtitlan and the Coricancha (golden enclosure) in Cuzco. These centers were considered the axis mundi, the place where the layers of the cosmos—the sky and the earth—joined.

The Aztec and Inca imperial governments controlled areas extending for thousands of miles in each direction. Each capital demanded the delivery of tribute and participated in long-distance trade that brought exotic materials to the heart of the empire, demonstrating its wealth and dominance over its frontiers. To unify the diverse peoples that they absorbed, these empires crafted official ideologies that affected the built environment, spaces, objects, images, and rituals. Many of the artworks that survived the ravages of time exemplify these strategies. Despite their efforts, both empires faced contestation to their right to rule, which helped pave the way for the Spanish conquest.