Artists Respond is an ongoing series of web-based creative projects by artists responding to exhibitions and collections on view at LACMA. 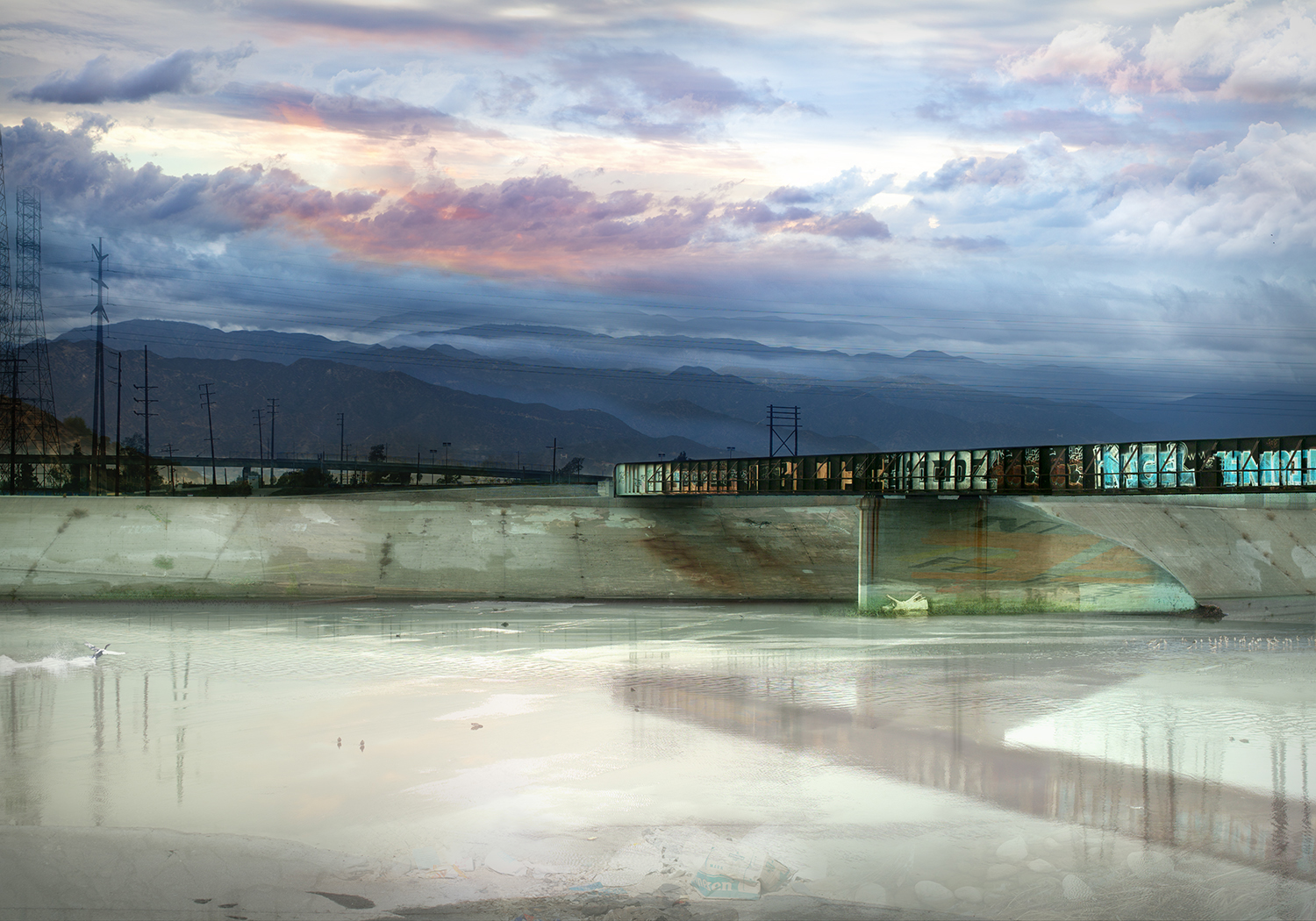 Artist Elena Dorfman chose Nature and the American Vision: The Hudson River School, as her point of departure, and, in particular, Thomas Cole’s painting The Course of Empire: The Savage State, part of his five-part series, The Course of Empire. The paintings, made between 1833 and 1836, chronicle the rise and fall of an imaginary city, and serve as an allegory for the cyclical progression of civilization from a state of barbarism through advanced social and cultural development, and eventual descent into ruin. Dorfman shares her thoughts on her own work and the legacy of the Hudson River School painters in this extended interview. 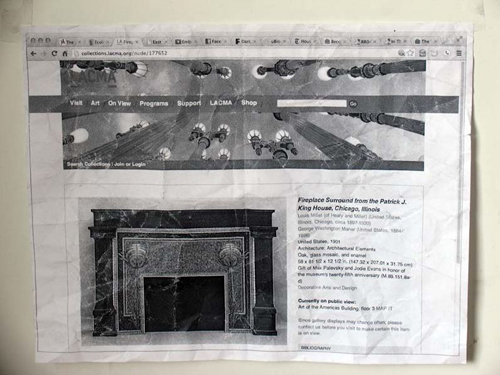 Via his Temporary Travel Office, artist Ryan Griffis performs projects that re-imagine the spaces of tourism. Responding to the Fireplace Surround from the Patrick J. King House, Chicago, Illinois he created Becoming Movable—A Motif-Rhythm Tour of Property. In studying the artifact’s history and its many associations, Griffis provided LACMA a wealth of ephemera that rivaled the artifact’s provenance on file. A link to Ryan's project is now part of the record for the fireplace mantle on our new collections website.

Steve Roden, Soundtracks for "Ghosts Before Breakfast" by Hans Richter

In conjunction with the exhibition Hans Richter: Encounters, artist Steve Roden is creating a series of sountracks for the Richter film "Ghosts Before Breakfast" (the original soundtrack was destroyed by the Nazis). See the full project, including Roden's evolving journal describing the process.

Inspired by the exhibition Drawing Surrealism, Los Angeles-based Antonio Mendoza and an anonymous French artist known as jimpunk creating a collaborative project fcalled Dysleksic.  The two artists are contributing to an evolving Tumblr mashup titled Dysleksic that juxtaposes random images culled from the internet in a dynamic ongoing collage. Both artists use the tools of data culture to present disruptive experiences with a quality of randomness that is also evident in surrealist practices such as frottage and exquisite corpse drawings. More about the project here. View Dysleksic here. 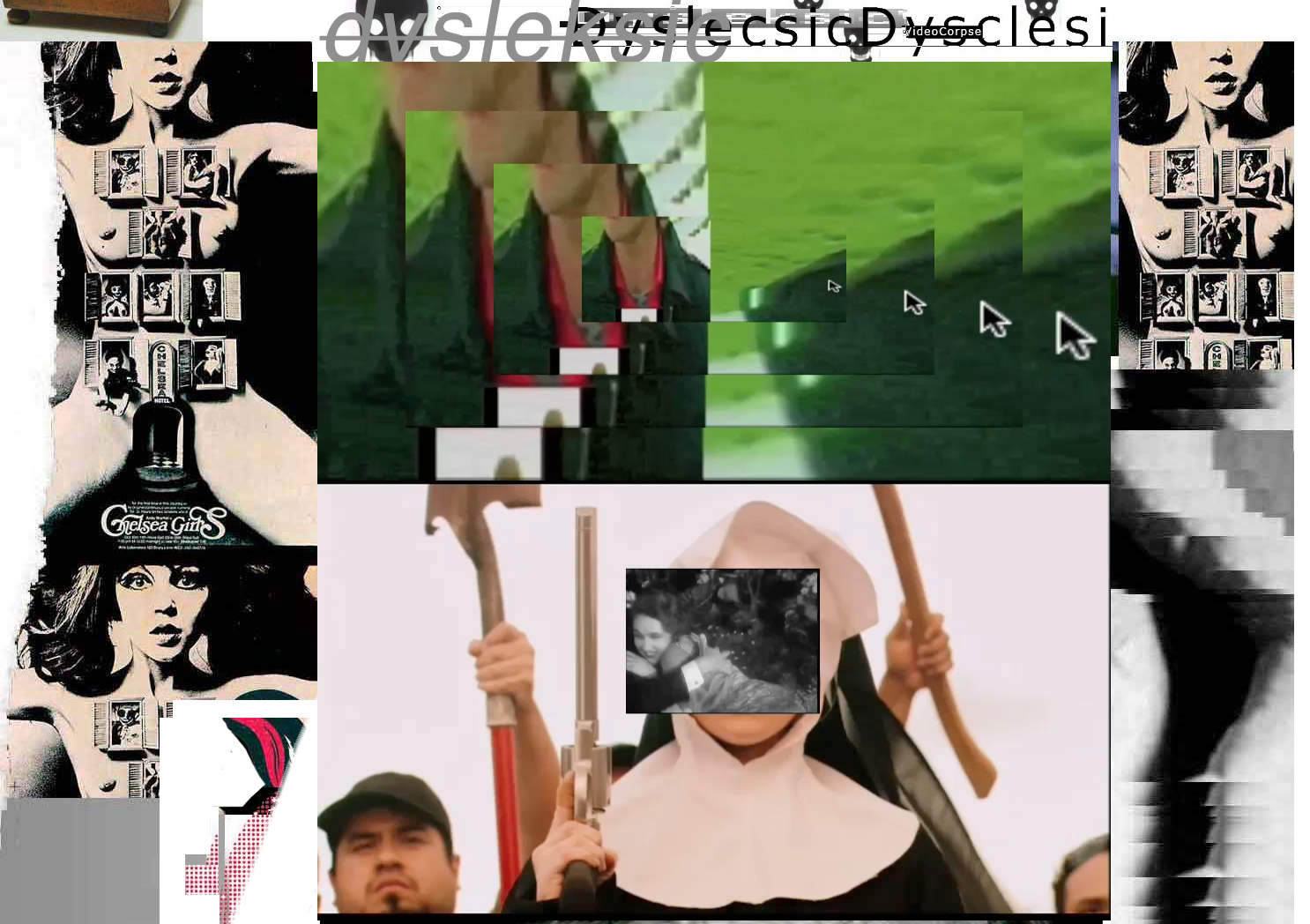 Note: In keeping with the nature of the artists' work, this project purposefully taxes the limits of the browser. The experience may not work perfectly in all browsers or for all users, and some users may find content blocked by network security software.

Fredrik Nilsen made all of the exquisite photographs in the publication for the exhibition Ken Price Sculpture: A Retrospective; for Artists Respond, Nilsen shares his own artistic practice, pairing some of his own work with selected works by Price in an online gallery that explores an affinity for Price's sculpture. Read more about the project. 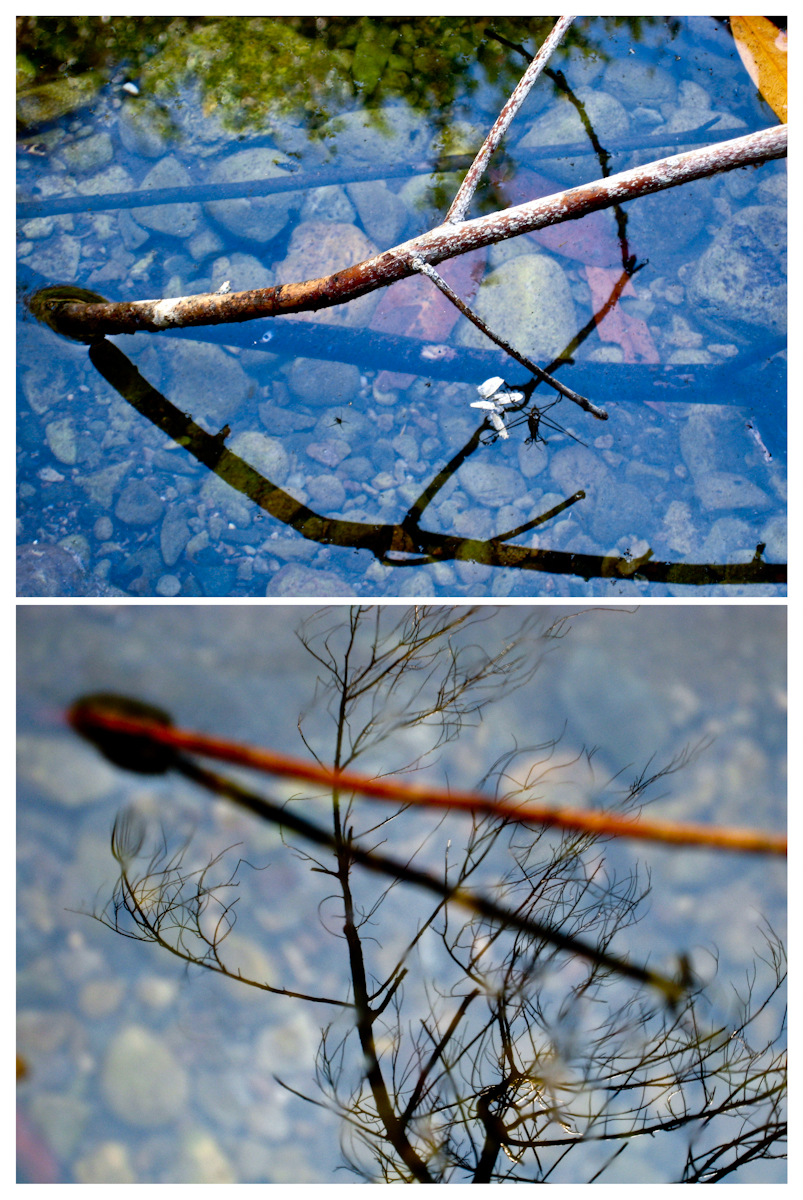 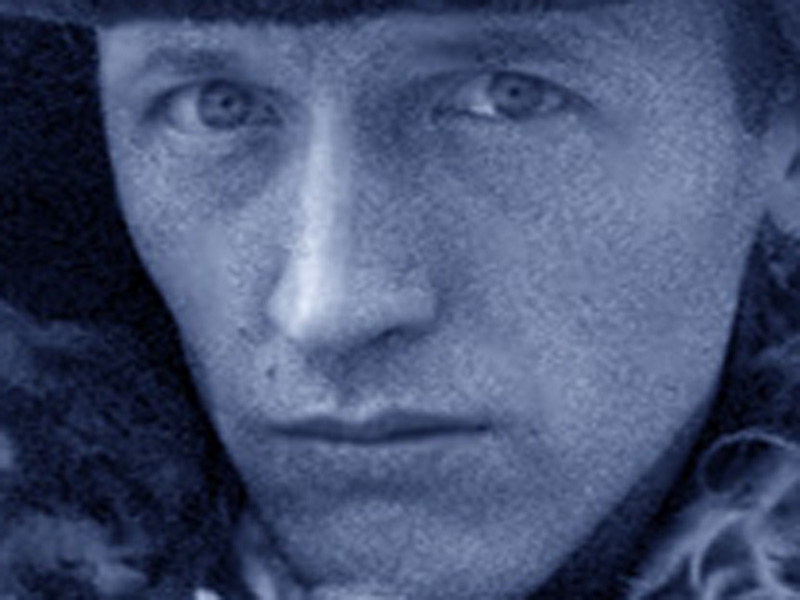 Artist Joe Biel chose The Sun and Other Stars: Katy Grannan and Charlie White as his jumping-off point. Inspired by the show, Biel created this online project, called Archive (fragment).  He said, of the project:

I thought the exhibition was brilliantly curated, because both artists deal with a unified view of image but in totally different ways. My response is made up of images of things that I thought about while looking at the work in the show. There are all these things that leap to mind about society, image, entertainment, what’s real and what’s fictitious...For me, it was a challenge to work on something for the web. I traditionally make drawings and paintings. I don’t think I’ve ever made a web piece before. It was really freeing though. It allowed me to not worry about certain problems that I do worry about when I’m making an “object”: surface quality, scale, how the drawing will occupy a gallery space. I thought about this project more as a piece of literature. These are the pure images out of my archive before they’ve been manipulated. For that reason, the piece has a more anthropological quality than one of my drawings, which is cleaned up by choice. Looking at the online response is like reading someone’s diary, rather than reading a novel. I found the process interesting and liberating. (Read more...)

"We were inspired by the campus at LACMA, the space between the buildings that creates this kind of public square, and further, by the early Russian avant garde and the work of Gustav Klutsis in particular. His work was trying to create a political discourse using early radio and projection technology. We recast this idea using 21st century emergent augmented reality technology. Using augmented reality, you can actually change the architecture and your perception of its function. This type of work, which is called GPS-located augmented reality, introduces a philosophical or psychological experience that juxtaposes one reality over another. Our work is a challenge to the notion of who owns virtual space and who is going to assert dominion over public virtual space. The virtual world is being constructed all around us."

On an iPhone or Android: go to http://project-o-rators.thruhere.net

On an iPad, download Layar at http://layar.com and search for "LACMA"

The project is location based, so you will need to be on campus at LACMA to experience it. Once you launch the augmented reality layer, you will encounter virtual 3-D objects on screen, superimposed over the outdoor public areas of the campus as you view them on screen through the camera on the device. 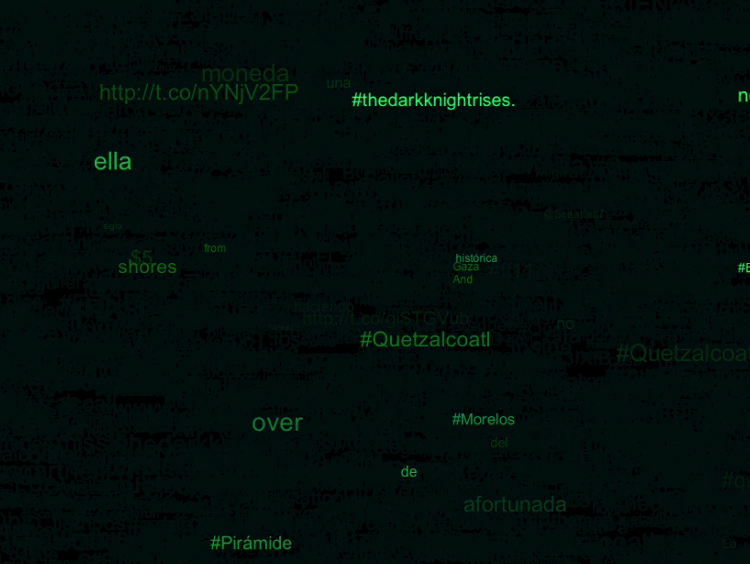 Artist Yucef Merhi created Quetzalcoatl 2.0.1.2. in response to The Children of the Plumed Serpent: the Legacy of Quetzalcoatl on view at LACMA through July 1, 2012. (Note: Supported browsers include Firefox, Safari or Chrome. Please enable the sound on your computer.)

Merhi's project draws in real-time news and information, recontextualizing it within what he calls a "non-linear poetic narrative" that draws on Mesoamerican myth, legend and imagery. " Technology is for me like paint is for a painter," he says. "I grew up in a technological world. The Internet has been crucial for me to think in different ways to assemble the poetic-art experience." 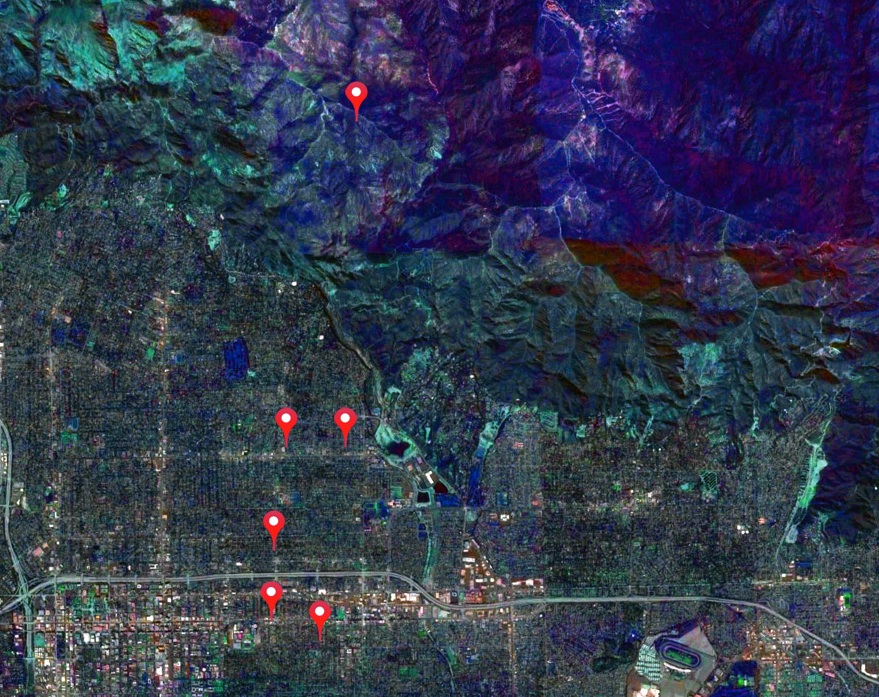 Anthony Lepore created  Night Walk, inspired by the exhibition Robert Adams: The Place We Live, and, in particular, by Adams's photos of suburban Colorado in the series Summer Nights.

Lepore maps a series of his own photographs created on evening dog walks near his home. From pictures of found debris from an epic windstorm to a favorite view of the Los Angeles basin from the mountains of the Angeles National Forest, the project documents Lepore's exploration of the urban geography of Southern California.

Read Lepore's statement about the project and his relationship to the work of Robert Adams. View Night Walk. 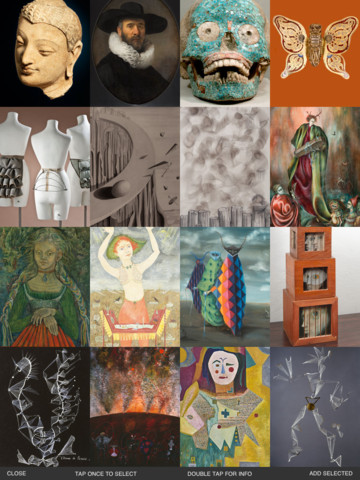 Inspired by the exhibition In Wonderland: The Surrealist Adventures of Women in the United States and Mexico, Jody Zellen designed this app for iPad and iPhone, simulating in digital form the exquisite corpse parlor game popular amongst early 20th century surrealist artists. She talks about the project here.

Jean Claude Wouters, a dancer and artist, once took part in an avant garde ballet perfromance in Brussels in which he wore a crinoline very much like those that give structure to some of the garments in our exhibition Fashioning Fashion: European Dress in Detail, 1700–1915. Exhibition curators Sharon Takeda and Kaye Spilker invited Wouters to revisit the crinoline and its relationship to the body in a series of exploratory movements. 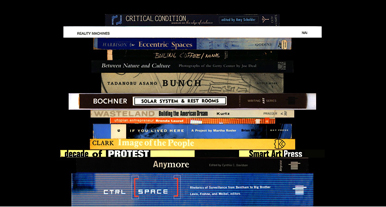 Taking her inspiration from the work of Steve Wolfe, Jody Zellen scanned all the books in her library and used them as a point of departure to create Spine Sonnet, a web based work that invites viewers to read the titles of 14 randomly juxtaposed book spines as found poetry.

View Spine Sonnet | Read an interview with Jody about the project

"I have often thought about how reading multiple titles of my art and theory books becomes a kind of concrete poetry," Zellen says. "Seeing the books and records recreated by Steve Wolfe inspired me to delve into this project." 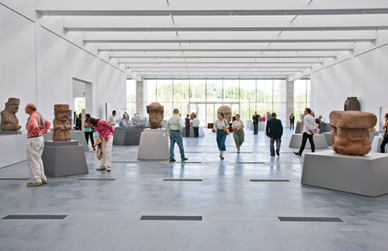 Be part of the art. Michael Trigilio has generated a 10-minute soundwork designed to be heard at LACMA in the vicinity of the Resnick Pavilion. Download or stream the piece here.

Visitors are encouraged to call 1-888-361-4NPR and contribute their own voice by humming, singing or sharing a comment. These interactions will be folded into the soundwork over a period of a few weeks, allowing the resonance of the Resnick Pavilion to evolve with public engagement.

The evolving soundwork will be available here, and by subscribing to the podcast feed.

Marisela Norte, In Your Presence 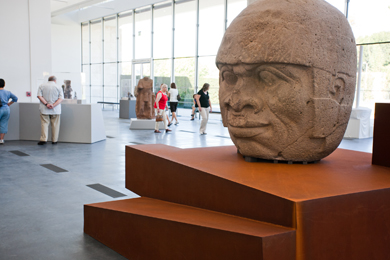 Marisela Norte is a writer from East Los Angeles. Her poetry and spoken-word performances often address every day life in Los Angeles, particularly her observations and experiences riding the bus.

As part of our Artist’s Respond series, she contributed an original poem responding to the exhibition Olmec: Colossal Masterworks of Ancient Mexico.

In Your Presence
by Marisela Norte

You
Disappeared
Between rivers
The muddy low lands

A Technicolor jungle
Color formed
Against an obsidian glass sky

Where stars
Once connected
Begin to tell a story

The ghosts of fingers
Trace the shape of
Your lips

Those flame eyebrows mine

The memory of you
A bag of bones
Fragments
The small, polished stones
Laid out like petals